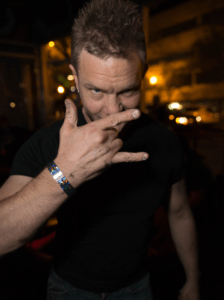 It’s easy to find Rob in a convention — look for the big crowd watching a possessed man paint with both hands, often with his eyes closed. Rob’s art has traveled far and wide, and his works have been exhibited in museums and galleries across the U.S., Europe and Asia. His live painting sessions are a mesmerizing combination of art, entertainment and excitement, and he’s painted for audiences of hundreds and of thousands. As a comic book artist, Rob has worked with Marvel, D.C., Todd McFarlane, Kevin Eastman and Image Comics, to name a few. His most notable credits include work on Star Wars: the Force Awakens, Terminator, Deep Space 9, Game of Thrones and in Heavy Metal Magazine, Buffy the Vampire Slayer and Firefly. Rob also created all the storyboards and animatics for the video games Ghost Rider and The Darkness. Rob’s illustrations have appeared as cover art and interior art material for Steve Jackson Games, TSR (Dungeons and Dragons), Wizards Of The Coast, Battle Of The Lords Of The 23rd Century, and many others.

When Rob is not in the studio or on the road painting, he is a sought-after director and producer of lms and music videos. He makes his home in southern California with his wife and family. Find out more about him at robprior.com